Product development and marketing teams are often facing a common problem. How do we identify those ‘must have’ attributes in our products? How can we know which ones to dial up or down to increase preference? What is the optimum level of an attribute?

Just about Right (JAR) scales are commonly used in consumer research to address these questions. JAR scales measure the appropriateness of the level of an attribute. Usually after rating overall liking, the respondent is asked to give their opinion of the intensity of specified product attributes in relation to their ‘Just about Right’ level. For example, they may be asked if the sweetness is ‘too high’, ‘too low’ or ‘Just about Right’.

The JAR scales are usually category type scales with 5 points with the anchors as below:

The criticism of JAR scales is that asking the consumer these diagnostic type questions is too demanding and the premise assumes that all consumers associate the same sensory characteristic with the same term, which is unlikely at best. However, with large respondent populations, JARS can give good direction to new product development. We would advise that only a small number of simple sensory attributes are included e.g. for a fruit drink, sweetness, acidity, overall flavour strength, thickness of mouthfeel might be of interest.

JAR scale data is non-parametric but its value lies in inspection of plots of the distribution of responses rather than in the statistical significance of differences between samples. As a rule of thumb if 65% or more of respondents state an attribute is JAR then no further action is probably required.

JAR data can be analysed by Penalty Analysis.

Penalty Analysis is usually performed for each product in the test separately. For each attribute, the analysis quantifies the decrease in overall liking resulting from that attribute not being JAR. This decrease in liking is the Penalty (or drop). The output is often represented graphically. 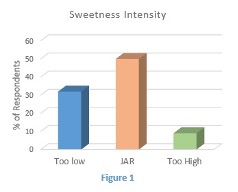 To calculate the Penalty, first group your respondents into those for which the attribute is ‘too low’; those ‘JAR’ and those ‘too high’ (Figure 1). 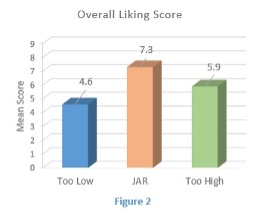 Now, calculate the percentage of consumers in each group. Next work out the mean overall liking score for each group.

The weighted or Net Penalty is calculated by multiplying the Penalty by the proportion of respondents who scored the attribute ‘too low’ or ‘too high’.

The example below is for raspberry and lemon flavoured chewy sweets. Here the Penalty before weighting has been plotted. Those attributes in the top right-hand quadrant (the Critical Corner) are of most need of adjustment. Modifications required are reduction of lemon flavour intensity and sharpness. In turn, this may decrease overall flavour strength. Slightly less chewiness and a paler colour are also recommended.